A High-Friction Surface Treatment like OmniGrip HF is an internationally proven road safety solution. OmniGrip HF is a ‘silent saver’ – drivers and riders won’t know it’s there until they need it.

“Used appropriately, they can help stop vehicles from skidding on or off roads, and increase a vehicle’s ability to brake more effectively at critical times”

The Australian Road Research Board says “Used appropriately, they (HFST) can help stop vehicles from skidding on or off roads, and increase a vehicle’s ability to brake more effectively at critical times” and that “…known accident blackspots, approaches to intersections and pedestrian crossings, and tricky-to-negotiate corners can all benefit from proper use of High-Friction Surface Treatments” (ARRB, 30 August 2018).

In Australia, Crash Reduction Factors for calcined bauxite surfaces like OmniGrip HF ranges from 40% for all casualty crashes, to 50% for wet weather crashes.  However, Australian and international studies have achieved much higher reductions when HFST was used to address specific crash issues, in some cases obtaining up to a 100% reduction in crashes.

Watch our video to see why and where you can reduce road crashes with OmniGrip HF high friction surfaces.

Download our free Guide to find out more about high-friction surfaces, with references to leading international publications about how they reduce crashes on road networks.

OmniGrip HF uses a proven resin binder to hold high-PSV calcined bauxite in position so that it doesn’t become embedded or displaced under the heaviest of braking. With its high PSV, calcined-bauxite resists polishing, ensuring it maintains its micro-texture for longer than other road surfaces.

Vehicle tyres adhere to the micro-texture of the calcined bauxite, providing better grip on bends and curves or when braking hard, enabling the driver or rider to maintain control.  The vehicle is more likely to stay within its lane, reducing the risk of losing control and leaving the road to hit a barrier, roadside object or another vehicle.

Used at intersection, vehicles can stop in a shorter-distance, reducing the likeihood of a crash and reducing impact speeds should one occur.

OmniGrip HF is resistant to road contaminants including oil, petrol and de-icing salts. It has excellent adhesion to asphalt and concrete surfaces so it can be used on all sealed roads and driveways.

With its high PSV and high skid-resistance, calcined-bauxite OmniGrip HF is much better than temporary treatments like spray seals, and short term measures like water-blasting conventional road surfaces to reduce binder and temporarily increase texture. The skid-resistance of calcined-bauxite surfaces are over 70 BPN, compared to the aggregates used in conventional road surfaces that are around 45 BPN.

OmniGrip HF is compliant with the most-stringent Australian road agency specifications, such as the Victorian Department of Transport’s Specification 430.

On site NATA accredited skid-resistance testing of calcined-bauxite OmniGrip HF sites on arterial roads in Melbourne, have retained their skid-resistance well past their expected life of 7-10 years. This is supported by retention of their surface texture when measured using ARRB’s iSSAVe automated laser data collection equipment.

If you require compliance testing in your project, please let us know at the time of quoting so that the independent testing and associated traffic management can be incorporated in your project.

OmniGrip HF is a vital component of a road manager’s Safe System road safety strategy that aims to eliminate injury on roads. 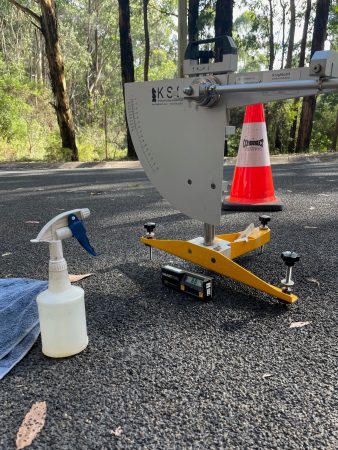 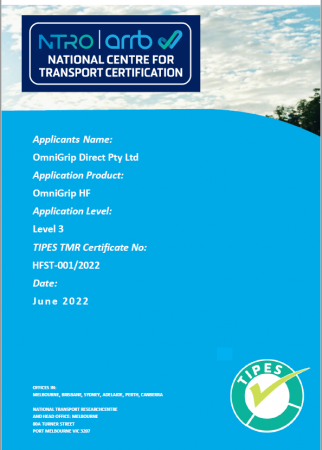 The following guides are available to help road managers considering how HFST can reduce crashes, reduce injuries and save lives. 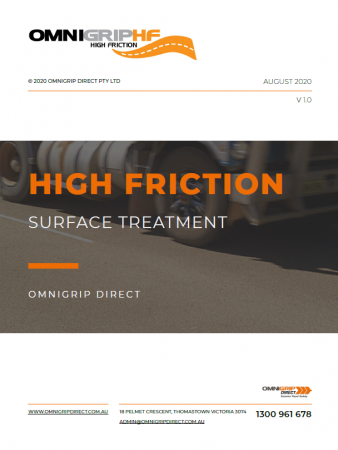 Make an enquiry about this product