OmniGrip CST is a fully-compliant durable, skid-resistant coloured surface treatment. Australian recycled-glass or natural aggregates are combined with a resin-binder, for use on roads, highways, bridge surfaces and paths. It is fully-compliant with the most stringent road surface standards in each State and Territory.

Where to use cst 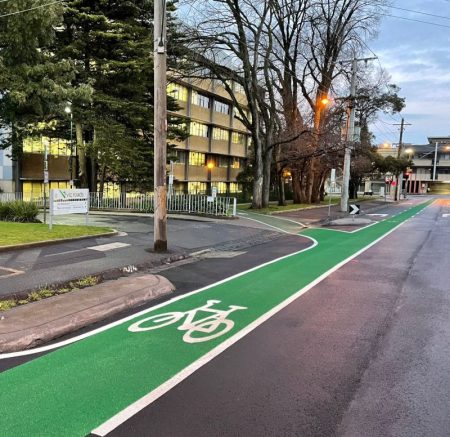 OmniGrip CST is widely used where safety is important and vulnerable road users like riders and pedestrians benefit from the durability of its skid-resistance, slip-resistance and colour. Examples include:

In buildings and landscaping, OmniGrip CST is a durable, slip and skid-resistant coloured surface that can be applied to many architectural applications where a durable textured surface is important for safety, including:

OmniGrip CST is designed to provide texture for skid resistance and durable colour for its design life. It maintains high skid resistance in both wet and dry conditions.

OmniGrip CST is available in a wide range of colours using coloured Australian recycled-glass, or natural aggregates for road, architectural and landscaping applications.

Paints and thermoplastics are specifically prohibited as Coloured Surface Treatments by road agency specifications in Victoria, New South Wales and Queensland. Coloured Surface Treatments are not paint and should be procured directly from specialist safety surface companies like OmniGrip Direct instead of paint specialists like linemarking companies.

OmniGrip CST is a proven coloured surface treatment for bicycle lanes, particularly through conflict zones where the paths of motor vehicles cross bicycle lanes. OmniGrip CST’s texture and colour are typically more durable than that of paint-based products, with an expected life of 5-8 years (depending on traffic). OmniGrip CST exceeds the performance requirements of VicRoads Specification 431.

“Cycling Victoria endorses the use of OmniGrip’s green coloured epoxy resin surface treatment for bicycle lanes in Victoria, and opposes the continued use of green paint as a satisfactory surface treatment.” 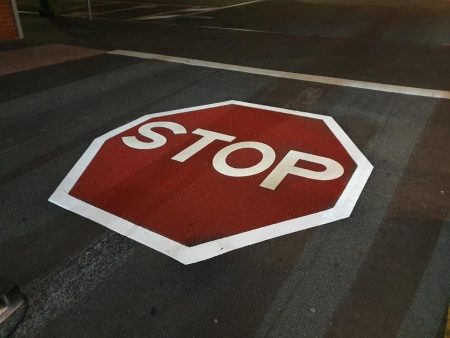 OmniGrip CST can be used to replace white and coloured pavement markings, including rumble bars, perceptual linemarking and lane arrows. With higher skid-resistance from its durable texture, it should be applied to popular motorcycling routes where riders are vulnerable to a loss of friction between the tyre and road surface. It can be used in conjunction with OmniGrip HF, our High Friction Surface Treatment.

“it should be considered for use on popular motorcycle routes where a loss of friction between the motorcycle tyre and road surface or painted areas/lines can result in a crash.”

Bus lanes are one of the toughest on-road environments for coloured surface treatments, and that’s where OmniGrip CST excels.  From its application on major roads in Sydney in preparation for its hosting of the Sydney Olympics, to widespread use in bus lanes in Melboourne, OmniGrip CST has proven itself time and time again. 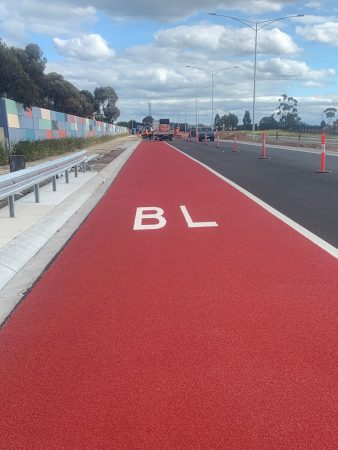 Texture is vital for safety in bus lanes, enabling fully loaded buses with unrestrained passengers to safely stop at bus-stops, traffic lights and in emergencies.  Alternative products that quickly lose their texture become hazardous, as was observed in red painted bus lanes in Sydney when buses were over-running their stops and sliding into intersections.

OmniGrip CST’s texture and colour are more durable than that of paint-based products, with an expected life of 5-8 years (depending on traffic).

For pedestrian only areas and decorative or landscaping applications, consider OmniGrip Deco. OmniGrip Deco is idea for plazas, courtyards, strip shopping centres, malls and landscaping, in natural or decorative colours and patterns.

Disclosure: OmniGrip Direct was a sponsor of Cycling Victoria in 2019-2020.

Make an enquiry about this product